I find most folks are very confused between ‘Orange Wine‘ and ‘Natural Wine‘ as they often think of them as one and the same. Something similar can be said for ‘Organic’ versus ‘Biodynamic‘ wines.

Why shouldn’t we be confused? No-one is really trying to teach us. All the wine trade is doing is selling and along the way it doesn’t seem to care whether we understand what they are saying!

It wasn’t always like this. There was a time when the wine trade in Ireland prided itself on providing quality wine education to its customers and consumers alike. And that was before we even had Orange, Natural, Organic and Biodynamic divides!!

By far the easiest way to understand anything about any wine is to bring it all back to the grapes they have been made from. Then have a look at how those grapes have been grown and then made into wine. That’s it. As simple as ….

Grapes can be grown in many different ways. If a wine is labelled ‘Organic‘ then the grapes must have been grown in a certified vineyard where all inputs are monitored. Thus inorganic fertilisers, herbicides, pesticides and other nasties will been replaced by 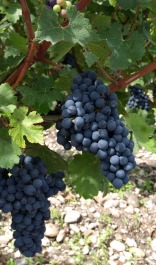 natural methods. It will be guaranteed for us by the certifying authority. There are many vineyards across the world, however, that adopt organic practices but choose not to be certified. Most of Chile is organic and now all of California also. If we look at the website of almost every producing nation we will see a Green Agenda these days – and that’s very good news for the grapes – and ultimately us!

A great (and long time – 20 years) exponent of Organic and Biodynamic wines in Ireland has been Mary Pawle Wines operating out of Kenmare in Kerry.

‘Organic Wine’ of course doesn’t end with the vineyard. It extends into practices adopted in the winery. Once again, we are protected by the certifying authorities. (‘Vegan‘ wines begin here also as for them nothing in the winery can have originated from an animal source and often the chief ‘culprit’ here is isinglass used to clarify wines – and that comes from fish bladders.)

Point of honour to note: the great Miguel Torres of Catalonia in Spain has single handed driven his empire towards a Green Agenda with a passion seldom seen elsewhere.

Hats off to Torres!

Biodynamic means something different but bear in mind that these wines must by definition be organic in the first instance. The difference has its basis in a philosophy developed by a chap called Rudolf Steiner who taught that everything in the universe is essentially connected. If we recognise that as fact then we will be bloody careful with how we treat things such as the soil, water, air and, well, Everything!!

Translate that into winemaking and you can understand that the Biodynamic Calendar and Biodynamic practices are based on beliefs that are impossible to refute. They may not be proven but they do no harm whatsoever and, lets face it, who wants to be the Pharisee when they are proven!?

If you get the chance read ‘Wine, Moon and  Stars’ by the southern France winemaker Gérard Bertrand (current European Winery of The Year). (O’Briens Wine) His wines are unquestionabley excellent. His belief in biodynamism is unshakeable. The same can be said for Michel Chapoutier in the Rhone, Cullen Wines in The Margaret River in Australia, Lapostelle in Chile, Bousquet in Argentina and many, many others around the world.

Now to ‘Orange’. I love some of these. Red wines get their colour from the skins of the grapes. Soak the grapes with their skins while they are fermenting and ‘Voila’  – Colour! Allow a little time and then whip away the skins and we have rosé wines. There is no such thing as ‘white’ grapes or, indeed, something as simple as ‘red grapes’! There is a multitude of colours available in so called ‘red skinned’ grapes. So, a young Pinot Noir might have a light depth with great deal of youthful  purple beside a young Syrah showing great depth and a ton of blackness to its inky youth. So, ferment a ‘white’ grape in contact with its skins and its alright if you extract colour.

All sorts of colours from shady off yellow hues to greens and tawnies and, yes, there are a few oranges in there also. Collectively these are ‘Orange Wines’.

… ‘white skinned’ grapes have colour in their skins …

One of my absolute favourite exponents of this comes from the Frescobaldi owned Atems winery in Friuli in the North of Italy. (Classic Drinks) They make both a non skin contact Pinot Grigio and a skin contact one. The latter is called ‘Ramato’ meaning ‘coppery’. It is quite extraordinary and shows that once the colour is bled from the skin so do a lot of flavour and structural elements also. If anyone ever brings in (and maybe someone does??!) the wines of Enrique Mendoza in Valencia then PLEEEase ask for bottle of his ‘tinaja fermented 60 days on the skins Moscatel Orange wine.!’ Closer to home distributors such as Vinostito and  le Caveau specialise in bringing us wine such as these and if you ever want to try an unusual Tinaja aged wine (that’s not orange) look at the new offering by VinosTito from Celler del Roure called ‘Cullerot‘ made from grapes some

of which we have never heard of – Tortosina, Pedro Ximinez, Verdil, Mersequera amd Macabeo! 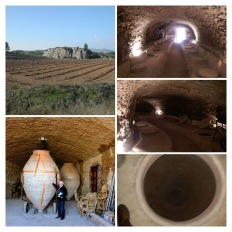 New and old Tinaja’s at Celler del Roure in Valencia

This is minimalist wine making and verges on to Natural Wines.  Now here’s a term that needs more

than just bit of explaining.

‘Natural’ is what we have ended up with without anyone actually agreeing that it’s the best term to use in the first place! Mick O’Connell MW at Findlater & Co makes his own wine in Sicily. (see photo of smiling Mick) At a recent tasting where his wine was on show with about 60 others of a similar ilk (see below) he made the point that no wine is completely natural. Otherwise it would, in effect, be spontaneous wand most likely the

vines would have had no pruning or tending in the first place! All wine, Mick believes, must have some degree of attention and most wines need a winemaker whose primary aim is to keep control of his ferment. As such she/he will make choices along the way  –  one of which may be to interfere as little as possible.

So, for ‘Natural‘ think wild yeast on organic grapes with no added supplements and as little artificial stabilisation as possible. A tiny bit of Sulphur goes along way while none at all will often mean a spoiled wine being presented in the restaurant. Many natural wines are described as different, funky and, sometimes, weird!

Most independent wine stores these days will offer you good examples of each of the styles mentioned above. Clearly ‘le Caveau’ in Kilkenny will have a Very Wide Selection. Green Man Wines near Harold’s Cross in Dublin is an absolutely top class store/restaurant/supporter of all minimalist and alternative wines.    Great Store.   While your’e there pick up a bottle of the Milan Nasterec Pinot Gris from the Czech Republic(minimal intervention organic: The grapes are hand-harvested and de-stemmed. The juice ferments in 600-liter 4-year-old wooden barrels. The skins remain in contact with the juice for 3 weeks. The wine spends 16 months in the same barrels for 16 months. The wine is bottled unfiltered, unfined, and with zero sulfur added! imported by Vinostito)

This is the ‘see below‘ bit mentioned above:

Findlater & Co is a big gang in the Irish Wine Trade. They import and distribute the likes of Torres, Bollinger, Wolf Blass, Masi and many others. They are also hell bent these days in bringing us some of the more obscure styles that in the past their management would have laughed at. Quite how two pallets of a relatively expensive wine made by a minimalist wine maker fits into their cost base is an intriguing exercise …. !

At a tasting recently, titled Fíon, of 60 such wines they showed some fabulous styles. I’ll post a bit more about these at another time. Here’s a teaser:

Josephine (a red from Blaufrankisch and Rosler):  Tremendous flavours. Vinification Method: Grapes are hand harvested and destemmed. Fermentation takes place in used 500, 1000 and 1500-liter barrels. The wine goes through elevage in 500-liter barrels for about 8 months, with no batonnage. The wine is bottled unfined, unfiltered, and with zero addition of sulfur.

Fidellos do Couto, Ribeira Sacra, Galicia, Spain.  One of the most scenic vineyard regions in the world.

Silex 2014 Pouilly Fumé  and Blanc Fumé de Pouilly 2014 are stunning.  Should be from the home of one of the finest biodynamic wineries ever! They make another wine in collaboration wiyta Jurancon winemaker titled Jurancon les Jardin de Babylone. We tried the  2011. It’s a white wine made from the Petit Manseng grape – astonishing  purity; endless strong flavours. I wish I could afford these!

iThere are no comments

Begin typing your search above and press return to search. Press Esc to cancel.